Since half term, the English Department have been teaching Year 7 about persuasive writing skills and the art of constructing a well researched argument. Pupils have learnt how to form a viewpoint from which to write, the use of rhetorical and persuasive techniques and the impact of  their choice of language and style of  delivery.

To mark the culmination of the project, Mrs Cartwright invited children to put their new found skills  into practice and deliver their speech at the annual Public Speaking Competition in front of the rest of the Year Group, teachers and judges. Undaunted by what, to some, might seem an incredibly intimidating challenge, the response this year was so enthusiastic  that the final line up of 18 speakers had to be picked from a hat.

The competition was held in Constance Green Hall and produced a highly informative, entertaining and impressive morning. Speakers spoke passionately about topics ranging from ’Lowering the Voting Age to 16’ and ‘The Importance of Trees’ to ‘The Power of Love and Hate’ and ‘Walking’.

Three external judges, all with extensive personal experience of Public Speaking, – Jane Keogh, Success Coach, Clare Downham, Motivational Speaker and Jack Farrar, Actor – had the unenviable task of choosing 1st, 2nd and 3rd places which they all agreed was an almost impossible task as the standard of delivery was so high.  Clare Downham, an ex Primary Head Teacher, was astounded at the accomplished poise and maturity of children who had only been  at Secondary School for one term.

After weighty deliberation, during which time the audience were entertained by the World Music Group led by Mrs Collett, the judges presented very well deserved Certificates of Achievement to all speakers, announcing Emily Hooson as the overall winner with her speech ‘Malala’, Carys Moore in 2nd place with ‘Walt Disney’ and Eloise Abraham  in 3rd place with ‘Nelson Mandela’. 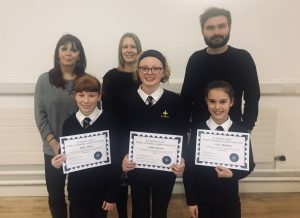