On Monday 9 May, the Year 9 Football Team faced Archbishop Holgate School in the Final of the North Yorkshire County Cup at Green Hammerton.  It was 0-0 at half time then early on in the second half, St. Aidan’s boys conceded taking the score to 1-0 to the York side.  In a show of determination and skill the team fought back, Sam Grass and Henry Collings scoring 2 goals making the Year 9 boys North Yorkshire Champions! Well done to the entire team who played really well and thanks to Mr Strover for fantastic coaching and encouragement! 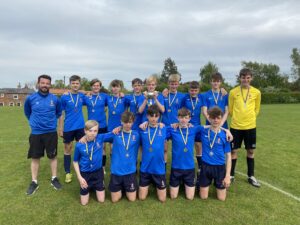